“The beauty in Shehzar Doja’s poetry lies not only in the imagery and the language itself but in the feeling it creates within the reader, a feeling which many a times lingers well after the reading itself.

In most of his poems Shehzar Doja gives his reader more than a ray of hope that gleans brightly in the heart of the abyss that has come to characterise life. This hope, however, does not stem out of a naive outlook at life; it is not a false perception; not an illusory device to soften the anxiety one faces. Rather, it is a probable reaction of someone who has just realised that he is “significant enough to be born”. Doja’s poetry makes frequent references to childhood and memories but it is not mere nostalgia: it is a thought prospect of a determined pilgrim, a resolute migrant who opts to be guided not by the gloomy blind man in the dark, but by some mysterious energy which compels him to keep drifting … towards an end. This little thing does not do justice to the poems”

“Shehzar Doja is a master of the understated. His simple evocative language transcends boundaries and transports us to the liminal spaces. It is in these spaces that the alchemy of his words takes root. Poems such as One Day, which is arguably the best poem in his debut collection; “One Day,/I heard there wasn’t more to life/ than sitting,/ peeling onions,/ layer after layer”. Indeed, Shehzar has the ability to peel back “layer after layer” to give us a close up look at the mundane, the everyday life, moments that he captures with eloquence, none more so than in the poem, Compos Mentis; “I, smell …flowers /pretty,/ weary, /tiring,/ exhilarating /footsteps and smell”.

There is something delicate and breakable in his poems, an undercurrent of loss and sadness that anchor his poem to our psyche.

Shehzar  is a poet who will continue to influence and I leave you with his words from The Last Refugee;  “I follow you into the mirage /… I /follow”

And we will, Shehzar. We surely will.”

“The play of sounds and the hints and ghosts of words that almost catch on other words that they are close to, but are not the same as, is lovely.”

From Vahni Capildeo, Forward Prize for best poetry collection, with Measures of Expatriation.2016

Shehzar Doja possesses, to quote the accomplished poet himself, “the poet’s capricious space.” Whether playing with language (“Look Icarus — he flies —/amaze, a maze?”), with poetry as a whole (“Where is my book of allusions?” & “I am no illiterate fool.”), or with the reader (beginning a poem with the fourth-wall-breaking address “Where were we?” or proclaiming, albeit in a character’s voice, “My words – settle down,/please settle down.”) At times he simply utilizes humour – “Mustard was the color of the day.” Doja’s playful brilliance shines through in Drift…

I hold its brilliance, ingenuity, capriciousness & grace in its place as high literature.” 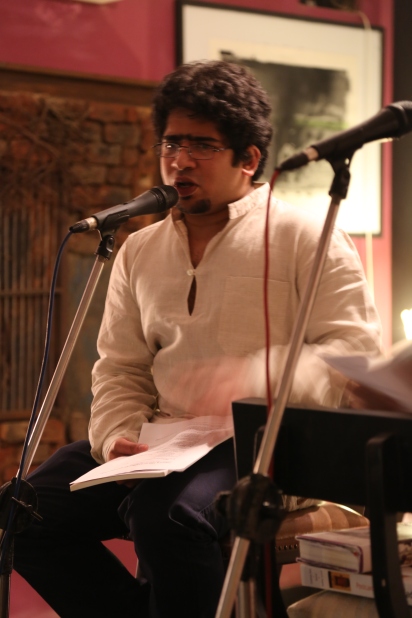 “While this drift, this theatre of disentanglement, achieves death and rust for the leaf, it, nonetheless, achieves life and relief for the more irregular, regenerative denominations of natural phenomenon.

Surely, Shehzar Doja knows this. He understands the cathartic power of disentanglement. His book, Drift, is a recollection of how this power, when embraced, affects the human experience in diverse ways. In it, 14 poems expose the liminal space that exists between alienation and soberness, as in that subliminal space that exists between the start and finish of a leaf’s detachment from a tree.”